The most favourite stage is a tumor infiltration only of the superficial part of the inner layer of the esphageal or gastric wall, the mucosa according to category T1 mucosa (m) or T1a. In such cases of early cancer a complete resection can often be achieved via the endoscope as an endoscopic resection, because lymph nodes outside of the wall are usually not infiltrated. If the carcinoma has already grown in deeper layers as submucosa (T1sm or T1b) or into the wall muscle (T2), the risk of lymphatic metastasis is significantly elevated. Therefore a surgical resection is necessary including the regional lymph nodes (see operation).

If the tumor infiltrates the whole wall (T3) a pretreatment by chemotherapy or radiochemotherapy is indicated. The aim of this socalled neoadjuvant treatment is to reduce the tumor in its size with the surrounding lymph node metastasis. This leads to better prerequisites for a complete removal in the following operation and to a better longterm outcome than primary surgery. Further occult systemic tumor cells could be destroyed by this induction therapy.

In cases with limited penetration of the tumor in neighbouring organs like liver or lung (T4a) this multimodal strategy is also possible under the prerequisite of complete surgical removal of the malignancy including parts of adjacent infiltrated organs.

Also in some selected cases with limited distant metastasis a neoadjuvant approach followed by resection of the primary tumor and the metastasis is an option.

The time span for the mentioned multimodal treatment is as follows:

The operation with the choice of resection and reconstruction depends on the location and the stage of the tumor and the functional capacity of the patient. The basic aim is complete removal of the tumor (R0 resection) together with the regional lymph nodes. R stands for residual and 0 for zero tumor left behind. The replacement of the resected esophagus is mostly performed with the stomach which is transposed into the chest.

The replacement of the stomach or parts of the stomach is carried out with the small bowel. Nowadays many of these operations can be performed in minimal invasive technique.

The standard operation starts at the abdomen in recumbent position of the patient with 5 trocars of 5 mm diameter (3x) and 10 mm (2x).

A high resolution video camera and small long instruments are inserted, which allow excellent vision and handling. The lower esophagus and the stomach are prepared and the regional lymph nodes are removed. The stomach is completely freed along its lesser and greater curvature preserving its vascularisation from distally. This part takes about 90 minutes.

Afterwards the patient is turned by 90 degrees with the right side up and the left side down. At the right middle part of the thorax a transverse incision is performed laterally between the rips. This approach is chosen because the esophagus is located in the posterior part of the chest directly anterior of the vertebra column and behind the trachea. As the rips have joints anterior at the sternum and posterior at the vertebra column, they can be distended in order to operate in the thorax. For this purpose the anesthesiologist deflates the right lung and increases the oxygen for the left lung.

The esophagus is removed en bloc with the surrounding lymph nodes up to the upper thoracic part. The freed and prepared stomach is pulled up through the hiatus of the diaphragm and a gastric conduit of about 5 cm in diameter is created by resection of the upper and right lateral part (1/4 to 1/3 of the stomach). This conduit is connected to the remaining esophagus by using a stapler instrument, which creates a circular anastomosis of nearly 3 cm in diameter by inserting small titan staples between the esophageal and gastric wall. This part of the operation affords about 2 hours. Together with the preparation of the anesthesia and the repositioning of the patient the whole procedure takes about 5 hours.

The patient is transferred to the intensive care unit and an effective postoperative pain control is achieved by a peridural catheter and additional analgetics.

I have performed the reported so called minimal invasive Hybrid esophagectomy very successfully in more than 1000 patients. A randomized controlled trial with the results of this technique has been published in the best medical journal of the world – the New England Journal of Medicine – in 2018 because the rates of postoperative complications were significantly lower compared to an open approach with a large median incision in the abdomen. In selected patients the esophagectomy can be performed minimally invasive also in the chest, however a significant benefit of this total minimal invasive approach compared to the Hybrid technique is not proven.

In patients with proximal location of the carcinoma e.g. upper thoracic or cervical part of the esophagus the resection has to be extended up to the neck.

Nevertheless, the reconstruction can still be performed by gastric pull-up with a cervical anastomosis. An alternative to surgery especially for the patients with cervical squamous cell carcinomas is definite radiochemotherapy. If the stomach is not available for reconstruction f.e. after previous gastric surgery the transverse part of the large bowel is used for replacement of the resected esophagus.

In patients with gastric cancer the surgical procedure is dependent on the location, the stage and some histological subtypes. The operation is usually performed via an abdominal incision. In case of a small carcinoma of the distal stomach often the proximal part can be preserved, if appropriate safety margins are reachable.

In case of a small tumor of the gastric inlet or the cardia the distal stomach (50 %) can be preserved if appropriate safety margins can be achieved (see under adenocarcinomas of the esophagogastric junction). Only in large carcinomas with aggressive type of proliferation a total gastrectomy is necessary.

The reconstruction is performed by small bowel and it is possible to create a pouch as a little new reservoir.

Adenocarcinomas of the Esophagogastric Junction

The tumors at the junction with the epicenter between 5 above to 5 cm below the anatomical cardia (lower esophageal sphincter) are classified in 3 types according to their center. This subdivision is named AEG classification. The acronyms A,E and G stand for the following terms:

This classification was originally published in 1987 by J.R. Siewert, A.H. Hölscher and two pathologists Karen Becker and Walter Gössner based on a morphometric study in the German journal “Der Chirurg” (see list of publications). According to the first author of this paper the classification is also entitled as the Siewert classification and is applied worldwide.

AEG II (Siewert type II) has its tumor center between 1 cm above to 2 cm below the lower esophageal sphincter and is also called the true cardia carcinoma.

AEG III (Siewert type III) characterizes a tumor with the epicenter between 2 to 5 cm below the lower esophageal sphincter and represents mainly a gastric carcinoma. 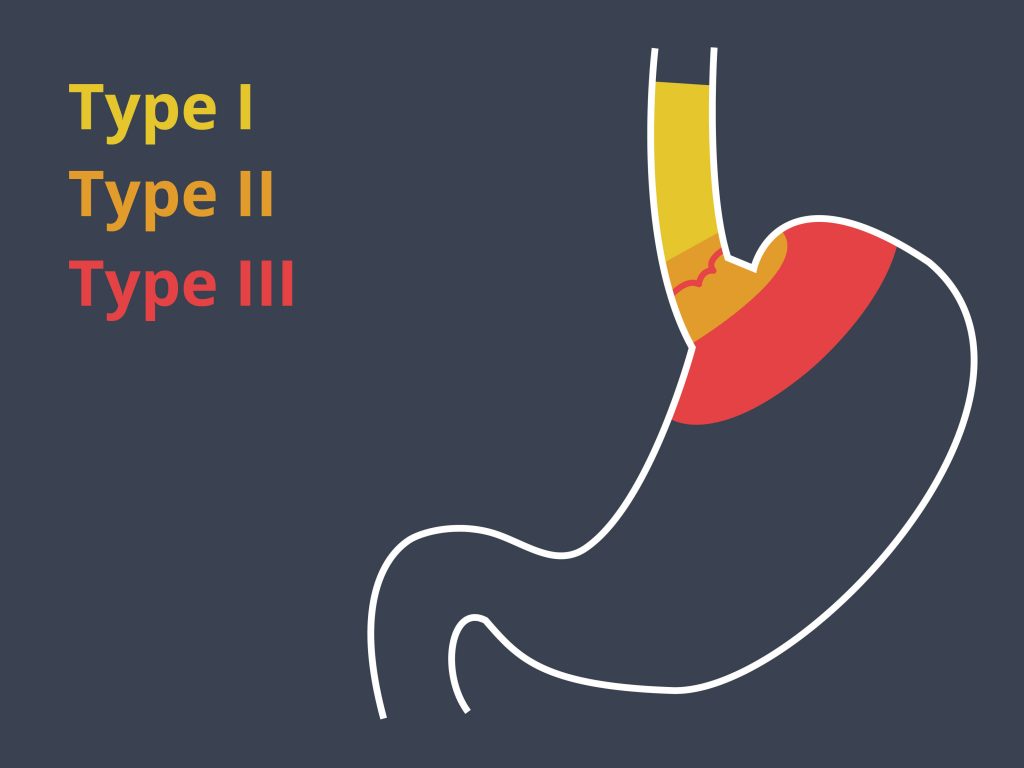 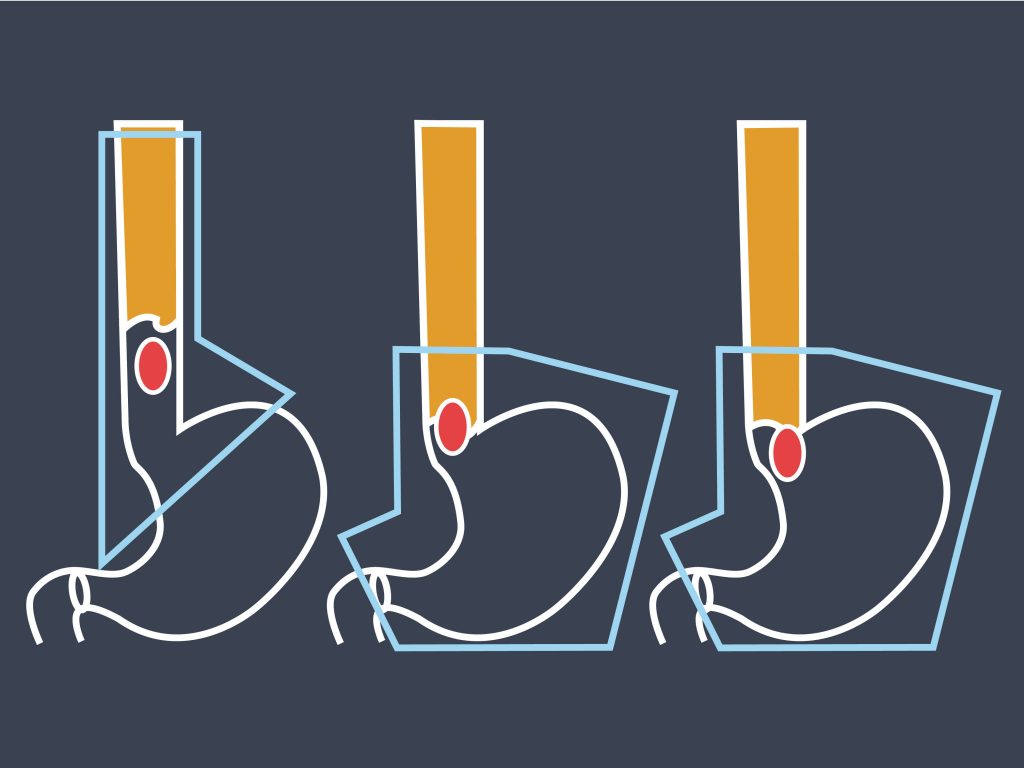 In AEG type II both procedures can be appropriate for complete resection. This has to be individually decided according to the criteria reported in the review from A.H. Hölscher and S. Law in “Gastric Cancer” 2019 (see publications).

In case of small tumors with low risk of type II or III a limited resection of the distal esophagus, the cardia and the upper stomach can be efficient. The reconstruction is performed with an end-to-side esophagojejunostomy Roux-en-Y in the lower mediastinum and the remnant stomach is anastomosed side-to-side to the jejunal loop 15 cm below. Thus two channels are present for emptying of the food intake from the upper jejunal loop (see figure and News).

In the first days after surgery the patient remains almost sober but he can drink small amounts of fluid. After one week of an uneventful course, when the stomach or the small bowel has recovered, the food intake is increased from liquids via semisolids to solid food. The patient has to learn to distribute his oral intake to 6 small portions per day. This is supported by nutritional advisers concerning the appropriate choice of diet and weight controls.

The postoperative hospital treatment usually takes 2 weeks. After discharge the patient can recover at home or in a rehab center. The suggested postoperative follow-up comprises check-ups every 3 months in the first, every 6 months in the second year and afterwards yearly.

Leiomyomas of the esophagus can usually be enucleated by thoracoscopy in minimal invasive technique without removal of esophageal parts. At the stomach such benign lesions or so called semimalignant tumors like GastroIntestinal Stroma Tumors (GIST) can mostly be removed by minimal invasive approach together with only small parts of the stomach. Diverticula of the esophagus are rare benign diseases, which mostly appear at the inlet of the cervical esophagus (Zenker Diverticulum). They can be removed via a small incision from the left side of the neck. Other diverticula are mostly located in the lower thoracic esophagus (Epiphrenic Diverticulum). The majority can be removed thoracoscopically by a minimal invasive approach.